One Ministry, One Church, One Message Worldwide

COLLEGE PARK, GA—Members of World Changers Church International (WCCI) have rallied behind their Houston fellowship church, offering help and hope in the aftermath of Hurricane Harvey. Financial gifts and supplies are being gathered for World Changers Church-Houston (WCCH) from other WCCI locations.

Led by Pastor Archie Collins and his wife, Melissa, WCCH has opened its 5.5-acre campus as a shelter and distribution center in the Copperfield area of northwest Houston and committed to be there for the long haul. As recovery work gets under way, members of WCCH help clean out affected buildings. Many of those displaced are returning to their homes, but some will not be able to. “We will be open until we are not needed anymore,” said Collins. “If one family needs somewhere (to stay), we don’t want them wandering around out there—we want to be the light.” Meanwhile, “Many families will also face ongoing practical needs as their income has been hit by not being able to work.”

Escaping Harvey with just minor water damage to his own home, Collins swung into immediate action with his wife and three teenage children. They took in two families forced to flee their homes, with Collins wading through waist-high water and employing a kayak to help rescue one group of people.

Since being offered as a distribution center, the WCCH sanctuary has been filled with donated clothes, and the fellowship hall filled with cots. The church is even sheltering a parakeet in a cage, brought from a flooded house.

Collins paid tribute to the helping spirit of those involved with WCCH’s effort, many of whom are not church members but are from the local area. Some members of the WCCH congregation were unable to reach the campus. “It has been wonderful to see people coming together as they have,” Collins said. “No one is asking what denomination you are or concerned about someone’s color. It’s just people helping people.”

The WCCH response is part of the commitment to care and service advocated by WCCI founder and senior pastor, Creflo Dollar. “He has always taught that the church should go where no one else will go and be prepared to do what no one else will do,” said Collins, who is also WCCI’s Global Missions Director, a role he filled at the College Park campus before going to Houston to open a WCCI fellowship church there in 2008. “We just want to be there for people.”

Dollar said that the response from Collins and WCCH members exemplified World Changers’ beliefs and values. “This is the church—grace in action,” he said. “Where there is a need, God wants us to respond. It’s a privilege to be able to share the love and grace we have received from God with others in their time of need, and to be able to support those who are doing so.” 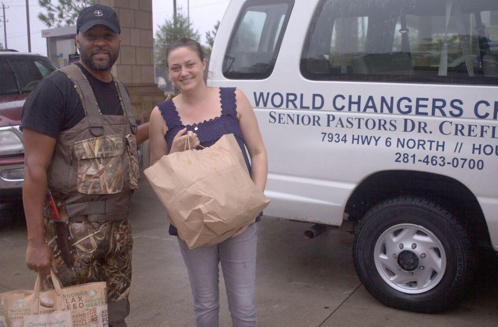 World Changers Church-Houston pastor, Archie Collins, and members have opened their campus to those in need of shelter, clothes, and supplies after being hit by Hurricane Harvey.